You may notice that there are levels for learners (Beginner, intermediate and advanced) on the right bar. 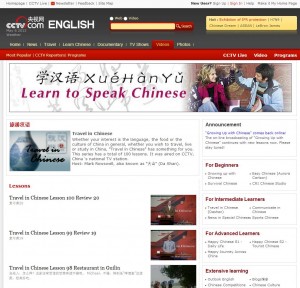 To know more about CCTV

China Central Television or Chinese Central Television, commonly abbreviated as CCTV, is the predominant state television broadcaster in mainland China. CCTV has a network of 22 channels broadcasting different programmes and is accessible to more than one billion viewers.[1] Most of its programmes are a mixture of documentary, comedy, entertainment, and drama, the majority of which consists of Chinese soap operas and entertainment.[2]

This site uses Akismet to reduce spam. Learn how your comment data is processed.